This weather is making no sense.  We had rain last week, then dry.  Then this past weekend it began clouding over.  Right now it is cloudy, kind of misty, but 68 with 91% humidity.  At least the good thing is its nice weather for gardening.  Not too cold, but not too hot either.

I went over to my neighbor last week to see her iris’ in bloom.  She had given me some rhizomes last fall which I attempted to plant.  Attempted since the deer insisted on pulling some of them put.  Well, it appears they are growing. This one is blooming in my garden.  Some of the others have buds, but have not quite bloomed yet.  We can hope. 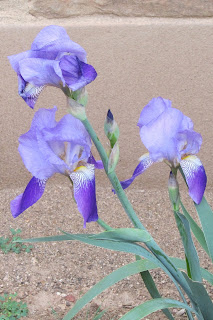 The roses I had purchased online are also blooming.  Here’s three of them.  Right now they are in pots, that’s the best I can do.  But they seem happy.  Hopefully soon they will get a better planting. 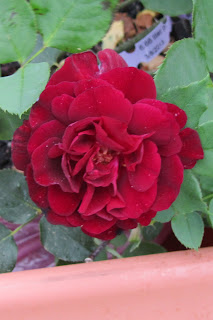 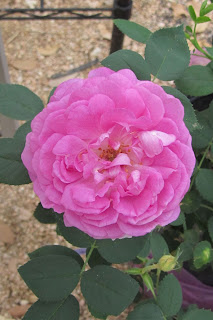 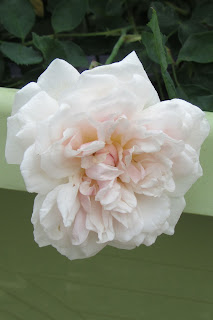 The greenhouse has been well worth the time and trouble. 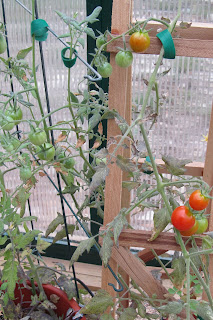 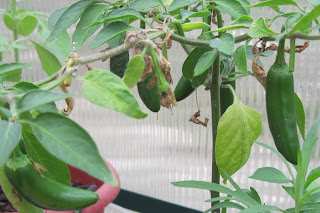 I’m not sure what kind of peppers these are.  They are actually a plant I bought last year, wrong time of year.  But I put it in the greenhouse and it has survived.  And now I have peppers.
The bird feeder we put up recently, well, the birds love it. 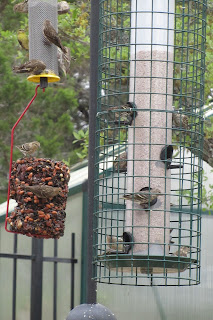 It tends to look like its alive.  And the area under it, where the birds throw seed is just as alive.  It appears we are now on the birds radar as a place for food.  They are happy birds, and since they also have the water fountain behind it, and trees, they now have food, water and shelter.  What more can they ask for.
We did put a small bird house up also.  Its attached to the back of the house.  It took all of 1 day for it to be occupied.  I guess that’s good.  And I’d say we have a thriving bird ecosystem – we had a hawk flying by last week.  It landed on one of the branches while we were outside working.  I guess that’s good.
We had help this past weekend.  Pat came over and we got a lot of yard things done.  I now have a small – 3′ x 3′ raised planter.  I moved some of the tomato plants into it, along with a pepper plant, watermelon, and bean plant.  We’ll see how they do.  I still have the netted cover I can use if birds began eating any of the veggies.  We’ll see how the plants grow first.  This is barely spring.  Come summer not much grows due to the heat.  But hopefully we’ll have time to get some of these things growing and producing before then.