Things  I need to remember for next year’s winter.  Cover the Esperanzas and the Plumbago.  They both got a bit too much freeze damage.  Luckily they are both coming back.  The crowns are alive but the branches got too much freezing temperature. I also had a small problem with the iris’ that Leena, my neighbor, gave me.  The iris’ look like they are growing.  But for some reason the deer keep trying to eat and pull up one poor iris.  I don’t know why. I keep replanting it, and they keep pulling it up.  I’m going to move it to the back and put it in a pot and see how it does. But overall the irises look good, like they are alive and growing.

The good new is it looks like we will be getting a fence.  It will be mainly black 6 foot tall iron, but it will have stone work columns sprinkled in there.  Since its about 350-375 feet of fence (maybe more) it will give me a large yard.  I just hope it can keep the deer out.  That’s the clincher.  But we have the HOA’s approval, we’ve found someone to build the fence, so we should be getting it built soon.  It doesn’t really cover much of the front of the house, and it doesn’t cover any of the front of the yard, but it does cover the side and the back area up to the green house.  We will have a couple of gates which will be nice.  I just hope all goes well and it gets built without any hang ups.  We can hope.

This is how the plumbago is doing.  It is coming back after its freeze, but not all plants look this good. Some look much worse. 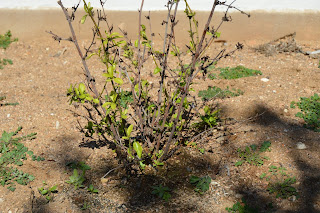 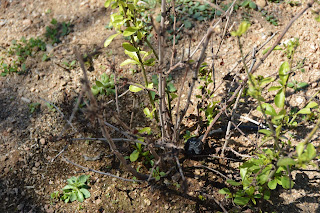 This is an esperanza, yellow bells.  At least its coming back from its base and from any canes that didn’t freeze too badly. I should probably cut back any canes that don’t sprout new growth. 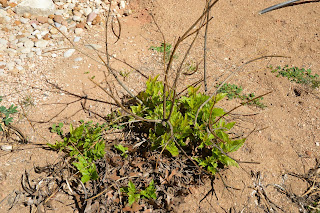 The rosemary did fine.  They look healthy, have some flowers on them and are doing great.  The only one not doing great was in pretty bad shape before winter came.  So I’m not worried about that one. 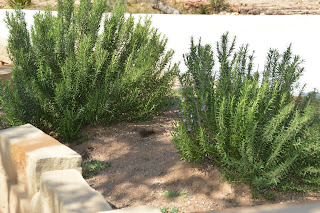 This is lantana.  I thought it was able to take the frost and I think it did an okay job.  It also appears to be coming back from some canes and from the center.  But these are plants the deer will eat, Improved Yellow Lantana, so whatever cames back is great news. 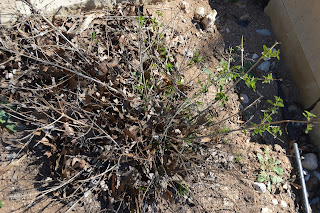 One other thing.  I’ve been setting lots of seeds in trays in the greenhouse.  They are just coming up gang busters.  I’m thrilled.  It’ll be less expensive then buys a lot of plants for the garden.  And since most are annuals, its not like I expect them to last until next year.  I am starting some perennials, we’ll see how they grow.  But the nice thing is at least this year we’ll be able to get plants in early, instead of getting them in as late as we did last year.   At least I’m much more hopeful this year, we should have a better looking yard then last year.