Well, its now the beginning of August, not going to plant anything new for a while. This is usually the hottest time of the year so its not a good time to plant.

In the front:Yellow Lantana seems to grow well and the deer and other critters don’t seem to eat it. They tasted it when it was first planted, but have not bothered it since. Now the Confetti Lantana is another story. They is on the same watering system as the yellow lantana but is not fairing quite as well. I have noticed that it does occasionally get munched on. Even though the Confetti lantana should get bigger then the yellow, I think if it can survive the summer, make it to fall and really set some good roots it might stand a better chance to making it and growing bigger. Right now I think its new shoots are getting eaten.

Seedlings:I put in seeds of morning glories, lavender, sweet pea, and marigolds. None are doing well. The morning glories are being eaten when still small, so they are struggling. It looks like one lavender plant is trying to come up. None of the sweet peas came up at all. The marigold seeds have sprouted and are trying. One problem with the seeds is that they were planted way too late. Even though I hand water them, it is hot, high 90’s well into the low 100’s. That is problem too much for them. Even water is not helping other than to keep them alive. They simply are not thriving. I will wait on these and see what happens.

Plants in the front:We put in rosemary (had to be replaced) which is doing fine. The upright rosemary is actually blooming, so they are doing well. The prostrate type had to be replaced. The first ones we planted had just been kept to their pots way to long. But the replacements are doing fine, they seem to be thriving. 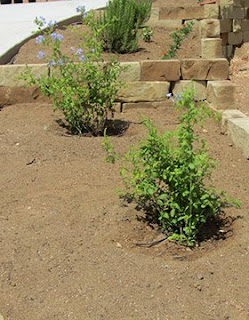 The Blue Plumbago seems to be doing okay. Again I think planting was done later then it should have been but the plants are surviving. They do get nibbled by the deer, but not a lot of nibbling. 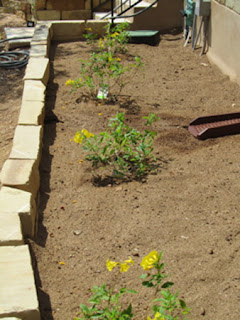 The Esperanza is doing fine. It is still flowering, does not seem to be getting eaten by the deer which is helping. Bill calls them Yellow Bells.